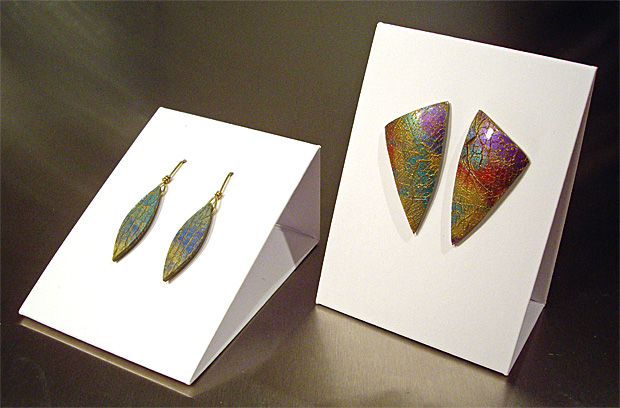 A while ago I designed my own earring display cards because I couldn’t find any with the features I wanted. A couple of students at my recent Polymer Clay Surface Design Techniques class were interested in how to make them, and since I’d had a vague idea of sharing the technique anyway I thought it was finally time to take the plunge (or a tiptoe!) into the world of social media and provide the information as a blog post.

Instructions are given below. They’re also summarised in the downloadable PDF diagram.

I also make my own matching boxes to pop these into.

For cardstock, I mostly use 200-210gsm Quill XL MultiBoard. It’s inexpensive, easily accessible in Australia from Officeworks, and is available in several sizes and many colours; I normally get A4 in packs of 100 sheets in black and white. Textured cardstock looks great too.

I like double-sided sticky tape because it’s only sticky when you want it to be and the various widths available are very convenient. You could also use a strong tape-runner style adhesive or a liquid glue… just make sure it’s relatively strong, particularly for the area where the assembly flap tucks in.

But the following are sufficient:

NOTE: I’ve used imperial measurements (inches) because most paper trimmers and scoring boards are calibrated that way. It’s weird at first if you’re used to the metric system but you do get used to it. Let me know if you’d like a metric version too, for instance if you’re using ruler and scissors or have a metric scoring board.

Click the image for a large version with brief instructions, or click HERE for the PDF version

To assemble for display, simply tuck the tapered end flap into the pocket at other end of the card.

When scoring paper or cardstock, the side you want to see should face upwards: press your scorelines into the “good” side, then fold away from the scorelines and toward the “hills” on the other side. This gives a smooth, clean fold and avoids the cracking that can occur when you fold the paper the other way. The best tip I’ve seen for remembering the correct way to fold after scoring is: “The hills are on the inside”.

When I make a bunch of these earring cards I usually stop at the point where the side reinforcing flaps are stuck down. I then grab them as I need them, decide whether they’ll be standing or reclining, and punch holes exactly where needed for the items I want to display.

Use a strip of scrap cardstock to help punch your earring holes an even distance from card edge. It’s easier to line your punch up with the cardstock strip than to just eyeball where the holes should go. (An alternative is to deliberately position the holes asymmetrically, avoiding the whole alignment bother in the first place!)

Make Your Own Earring Display Cards